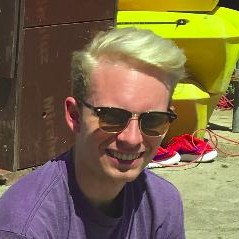 This is the first post in the In Raw Numpy series. This series is an attempt to provide readers (and myself) with an understanding of some of the most frequently-used machine learning methods by going through the math and intuition, and implementing it using just python and numpy.

You can find the full code accompanying this post here.

t-SNE is an algorithm that lets us to do dimensionality reduction. This means we can take some data that lives in a high-dimensional space (such as images, which usually consist of thousands of pixels), and visualise it in a lower-dimensional space. This is desirable, as humans are much better at understanding data when it is presented in a two- or three-dimensional space.

Take MNIST for example, a classic dataset of images of handwritten digits from 0 to 9. MNIST images are 28x28 pixels, meaning they live in 784-dimensional space. With t-SNE, we can reduce this to just two dimensions, and get a picture like this: 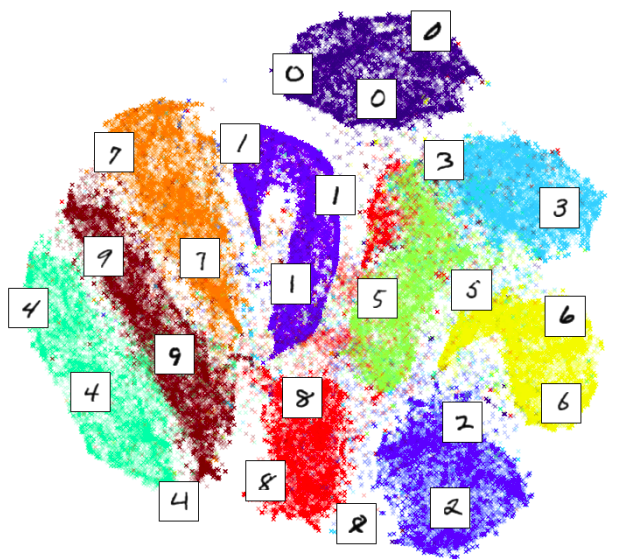 MNIST images visualised in two dimesnions using t-SNE. Colours indicate the digit of each image. (via)

From here on, this article is focused on the implementation of t-SNE. If you want to understand more about dimensionality reduction in general, I recommend this great blog post from Chris Olah. If you’re interested in learning how to use t-SNE effectively, then definitely check this out.

t-distributed Stochastic Neighbor Embedding, or t-SNE, was developed by Geoffrey Hinton and Laurens van der Maaten. Their paper introducing t-SNE is very clear and easy to follow, and I more or less follow it in this post.

As suggested by the acronym, most of t-SNE is SNE, or the Stochastic Neighbor Embedding algorithm. We cover this first.

SNE works by converting the euclidean distance between data points to conditional probabilities that represent similarities:

Essentially this is saying that the probability of point \(x_j\) being a neighbour of point \(x_i\) is proportional to the distance between these two points (we’ll see where the \(\sigma_i\)’s come from a bit later).

Our overall goal is to pick the points in \(\mathbf{Y}\) such that this resulting conditional probability distribution \(q\) is similar to \(p\). This is achieved by minimising a cost: the KL-divergence between these two distributions. This is defined as follows:

We want to minimise this cost. Since we’re going to use gradient descent, we’re only really interested in its gradient with respect to our 2D representation \(\mathbf{Y}\). But more on that later.

In numpy we can implement this as:

This function uses a bit of linear algebra magic for efficiency, but it returns an \(N\)x\(N\) matrix whose \((i,j)\)’th entry is the negative squared euclidean disance between inputs points \(x_i\) and \(x_j\).

Note that we have taken care of the need for \( p_{i|i} = 0 \) by replacing the diagonal entries of the exponentiated negative distances matrix with zeros (using np.fill_diagonal).

In the previous code snippet, the sigmas argument should be an \(N\)-length vector containing each of the \(\sigma_i\)’s. How do we get these \(\sigma_i\)’s? This is where perplexity comes into SNE. The perplexity of any of the rows of the conditional probabilities matrix \(P\) is defined as:

In SNE (and t-SNE) perplexity is a parameter that we set (usually between 5 and 50). We then set the \(\sigma_i\)’s such that for each row of \(P\), the perplexity of that row is equal to our desired perplexity – the parameter we set.

Let’s intuit about this for a moment. If a probability distribution has high entropy, it means that it is relatively flat – that is, the probabilities of most of the elements in the distribution are around the same.

Perplexity increases with entropy. Thus, if we desire higher perplexity, we want all of the \(p_{j|i}\) (for a given \(i\)) to be more similar to each other. In other words, we want the probability distribution \(P_i\) to be flatter. We can achieve this by increasing \(\sigma_i\) – this acts just like the temperature parameter sometimes used in the softmax function. The larger the \(\sigma_i\) we divide by, the closer the probability distribution gets to having all probabilities equal to just \(1/N\).

So, if we want higher perplexity it means we are going to set our \(\sigma_i\)’s to be larger, which will cause the conditional probability distributions to become flatter. This essentially increases the number of neighbours each point has (if we define \(x_i\) and \(x_j\) as neighbours if \(p_{j|i}\) is below a certain probability threshold). This is why you may hear people roughly equating the perplexity parameter to the number of neighbours we believe each point has.

This is possible because perplexity \(Perp(P_i)\) is a monotonically increasing function of \(\sigma_i\).

To find our \(\sigma_i\), we need to pass an eval_fn to this binary_search function that takes a given \(\sigma_i\) as its argument and returns the perplexity of \(P_i\) with that \(\sigma_i\).

We now have everything we need to estimate SNE – we have \(q\) and \(p\). We could find a decent 2D representation \(\mathbf{Y}\) by descending the gradient of the cost \(C\) with respect to \(\mathbf{Y}\) until convergence.

Since the gradient of SNE is a little bit trickier to implement however, let’s instead use Symmetric SNE, which is also introduced in the t-SNE paper as an alternative that is “just as good.”

This is just like the softmax we had before, except now the normalising term in the denominator is summed over the entire matrix, rather than just the current row.

We can easily obtain these newly-defined joint \(p\) and \(q\) distributions in python:

Let’s also define a p_joint function that takes our data matrix \(\textbf{X}\) and returns the matrix of joint probabilities \(P\), estimating the required \(\sigma_i\)’s and conditional probabilities matrix along the way:

So we have our joint distributions \(p\) and \(q\). If we calculate these, then we can use the following gradient to update the \(i\)’th row of our low-dimensional representation \(\mathbf{Y}\):

In python, we can use the following function to estimate this gradient, given the joint probability matrices P and Q, and the current lower-dimensional representations Y.

Once we have the gradients, as we are doing gradient descent, we update \(y_i\) through the following update equation:

So now we have everything we need to estimate Symmetric SNE.

You can find the load_mnist function in the repo, which will prepare the dataset as specified.

Here’s what the results look like after running Symmetric SNE for 500 iterations: 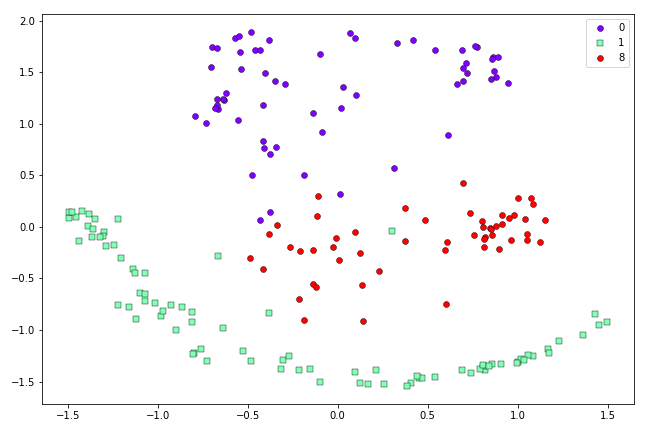 Resulting two-dimensional representation of the first 200 0’s, 1’s and 8’s in the MNIST dataset, obtained via Symmetric SNE.

So we can see in this case Symmetric SNE is still quite capable of separating out the three different types of data that we have in our dataset.

Putting the t in t-SNE

Foei! That was a lot of effort. Fortunately to go from Symmetric SNE to t-SNE is simple. The only real difference is how we define the joint probability distribution matrix \(Q\), which has entries \(q_{ij}\). In t-SNE, this changes from \((2)\) to the following:

This is derived by assuming the \(q_{ij}\) follow a Student t-distribution with one degree of freedom. Van der Maaten and Hinton note that this has the nice property that the numerator approaches an inverse square law for large distances in the low-dimensional space. Essentially, this means the algorithm is almost invariant to the general scale of the low-dimensional mapping. Thus the optimisation works in the same way for points that are very far apart as it does for points that are closer together.

This addresses the so-called ‘crowding problem:’ when we try to represent a high-dimensional dataset in two or three dimensions, it becomes difficult to separate nearby data points from moderately-far-apart data points – everything becomes crowded together, and this prevents the natural clusters in the dataset from becoming separated.

We can implement this new \(q_{ij}\) in python as follows:

Note that we used 1. - distances instead of 1. + distances as our distance function returns negative distances.

The only thing left to do now is to re-estimate the gradient of the cost with respect to \(\mathbf{Y}\). This gradient dervied in the t-SNE paper as:

Basically, we have just multiplied the Symmetric SNE gradient by the inv_distances matrix we obtained halfway through the q_tsne function shown just above (this is why we also returned this matrix).

We can easily implement this by just extending our earlier Symmetric SNE gradient function:

We saw in the call to estimate_sne in our main() function above that these two functions (q_tsne and tsne_grad) will be automatically passed to the training loop if TSNE = True. Hence we just need to set this flag if we want TSNE instead of Symmetric SNE. Easy! 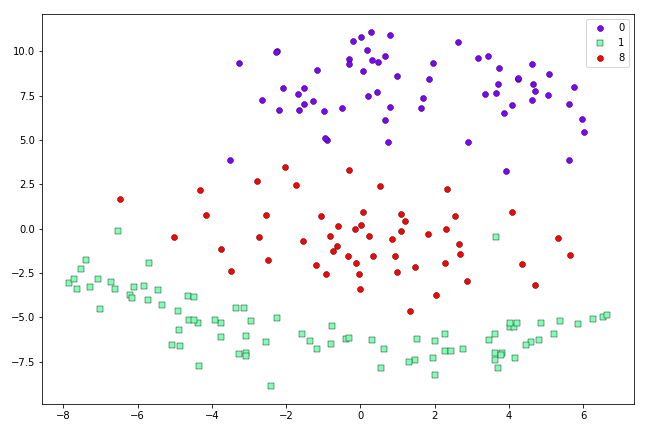 This looks a little better than the Symmetric SNE result above. When we scale up to more challenging cases, the advantages of t-SNE are clearer. Here are the results from Symmetric SNE versus t-SNE when we use the first 500 0’s, 1’s, 4’s, 7’s and 8’s from the MNIST dataset: 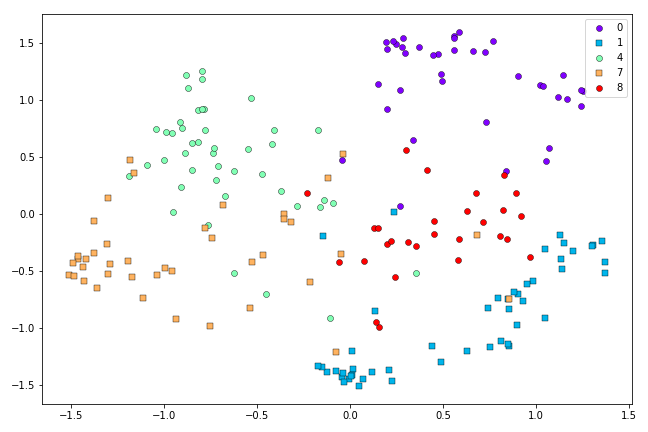 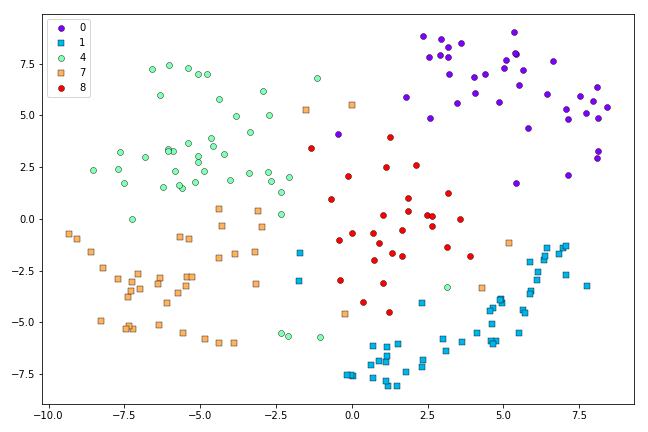 It looks like the Symmetric SNE has had a harder time disentagling the classes than t-SNE, in this case.

Overall, the results look a tad lacklustre as, for simplicity, I’ve omitted a number of optimisation details from the original t-SNE paper (plus I used only 500 data points and barely tuned the hyperparameters).

Still, this exercise really helped me to properly understand how t-SNE works. I hope it had a similar effect for you.